THE "ORDER OF THE VIRGIN" 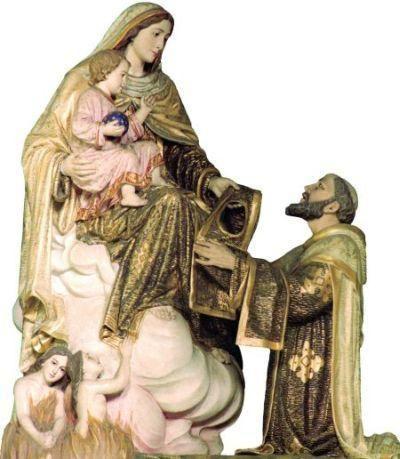 We profess our adherence to the Tradition of the Order, stamped with the authority of CATHOLIC Rome - the pillar and ground of the Truth (I Tim. 3.15), on the divine authenticity of Our Blessed Mother's visitation to Her General with Her great Scapular promise; whereas, the official 'Order of Discalced Carmelites' now dismisses this as the 'liberal'-Modernists do to be a 'myth'.

"Receive, my beloved Son, this Habit of Thy Order
[the Scapular]: this shall be to thee and to all the Carmelites a privilege, that whosoever dies clothed in this shall never suffer eternal fire. Behold a sign of peace, a safeguard in danger, a pledge of my eternal alliance."

- the Immaculata, in Her visitation to St. Simon Stock, then General of Her Order

We are the Discalced Carmelites who adhere to the "Catholic God"* of our sacred Tridentine** Latin Rite of Divine Worship and, true to the traditional ideal of St. Teresa of Jesus and of St. John of the Cross, follow the traditional strict religious discipline and ceremonial of the Teresian "Order of the Virgin" - in accordance with the desire of the Heart of our good God: Stand ye on the ways, and see and ask for the old paths which is the good way, and walk ye in it: and you shall find refreshment for your souls (Jeremias 6.16).... And we charge you, brethren, in the Name of Our Lord Jesus Christ: that you withdraw yourselves from them who walk disorderly, and not according to the Tradition which they have received of us (II Thess. 3.6).

We reject the "New 'Catholic' abNormal" since Vatican II (1962-65) or the ‘liberal’-Modernist Vatican II-'Church' ‘updated’ and made in-sync with the "New World disOrder" (the Secularist 'paradise'-dominion of the Synagogue of SatanApoc. 2.9 now colored by the 'rainbow' flag) : the 'Neo-Catholicism' based on the "NEW 'Catholic [t]HEOlogy'" or the "NEW ecumenical [g]OD" who does not judge and condemn the Synagogue and its tentacles (Communism and Freemasonry), the Mohammedans (or Moslems), pagans, 'Bible only' heretics, schismatic 'Orthodox', apostates, and 'free-thinkers' who refuse to be subject (Heb. 2.8) to Christ the SOVEREIGN King through the SUPREME Roman Pontiff (MAXIMUS Pontifex) crowned with the tiara (as Vicar of the King of kings and Lord of lords - Apoc. 17.14)." 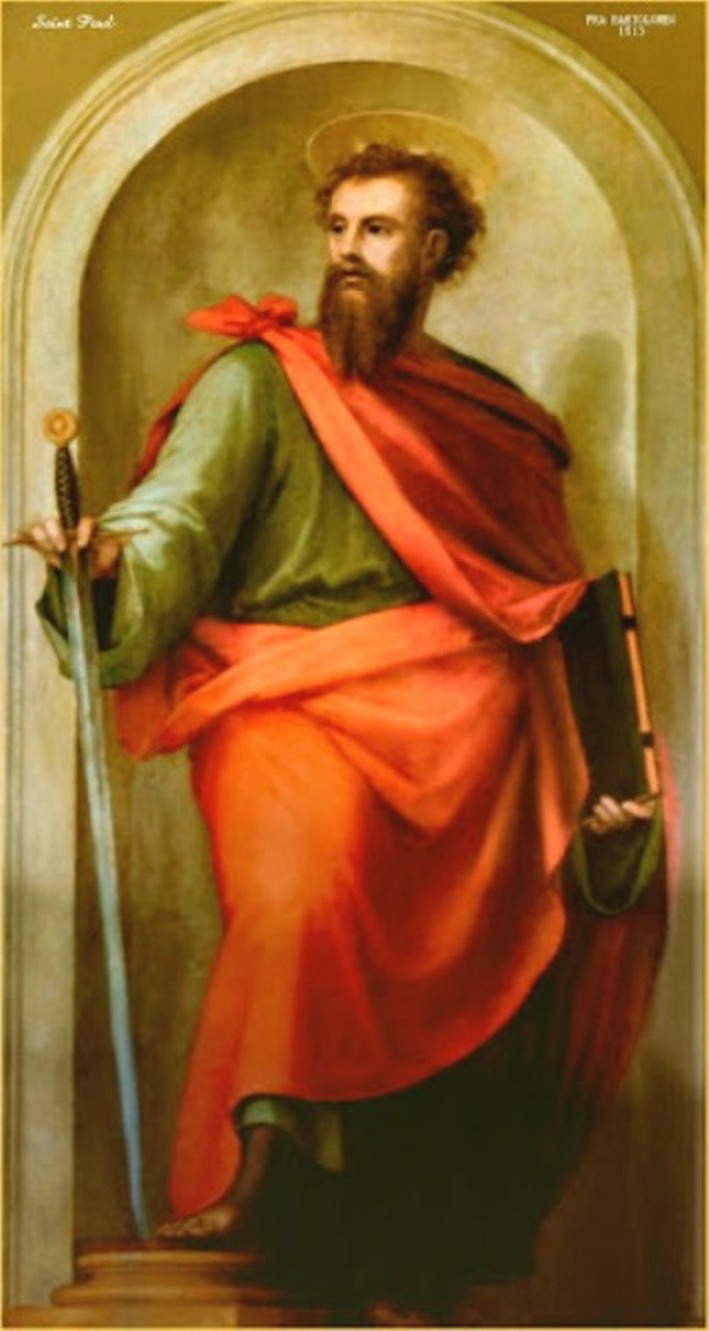 When I [see] that
HE WALK[S] NOT UPRIGHTLY

UNTO THE TRUTH of the Gospel 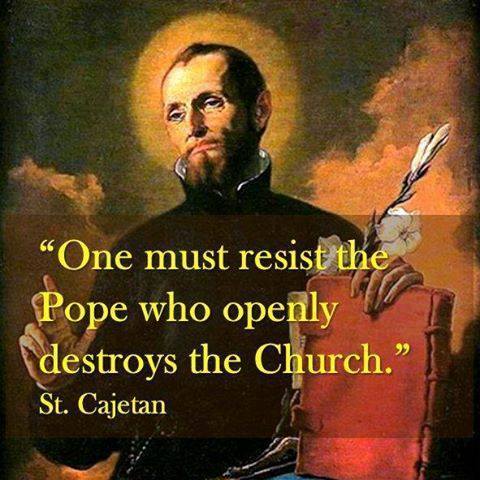 More about us on our parent site... 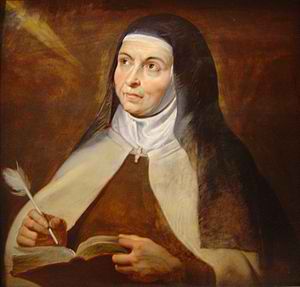 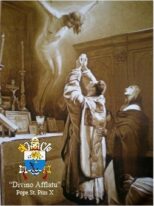 Our Traditional Source of Sanity & Sanctity 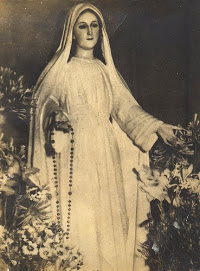 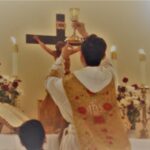 The Sword of the Fire of God ("Ignis Dei"), the General of the Immaculata's Order, passes on to us

Pachapapa Bergoglio - embarassed 'representative' of Christ but proud friend of the "Synagogue of Satan" (Apoc. 2.9). 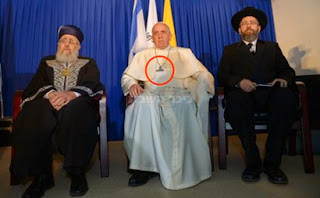 "Men of Open Lawlessness : the Antichrist and his 'precursor' - the Antipope"

"Obeying all the Commandments... this paralyzes you, too... it doesn't allow you to go on forward" (RomeReports, 27th Jan 2017) 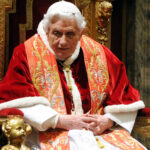 ... You shall see the abomination... in the Holy Place... (Mt. 24.15) - Protestant 'banquet-fellowship' (right pic: moray.anglican.org), #ORDINARYForm source & fount of the "New abNormal" libidinous pastor & flock (like people, like priest - Osee 4.9) - FLEE TO THE MOUNTAINS (v.16): that is, our true grace-giving Sacraments could be found but rare & with great difficulty outside our officially 'Catholic' walls.

Is it because there is no God... that thou... (IV Ki. 1.6) welcometh and honoureth the demon of the idol pachamama? 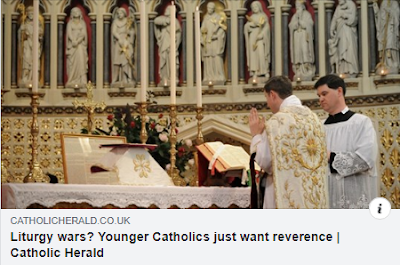 The True Catholic Mass (Sacramentally Valid and LICIT - grace-giving) : Union with God "in Truth and in Justice;" NOT JUST in Solemn and Reverential Form - the MERE #SENSEofthesacred

Against Sedevacantism - We have a Pope but the whole head is sick... From the sole of the foot unto the top of the head, there is no soundness therein (Is. 1.5) 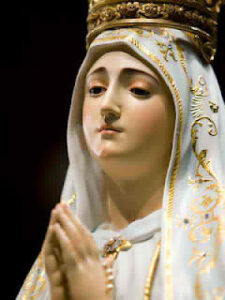 "[NOT IN ROME will]... the dogma of the Faith [be]... always preserved, etc." (the Apocalyptic Woman in ending the Second Part and introducing the Third of Her Great Secret @ Fatima)

Did the sun miraculously stop (traditionally, counted among the miracles in Sacred Writ) as it had stopped at the command of Josue of Old?

Or, the Orient from on high has visited us (Lk. 1.78) and displayed brightly the delight of the Lord (Ps. 26.4) in His traditional dwelling place amongst us?

On 5th July 2019, a First Friday and Octave Day of the Feast of the Most Sacred Heart of Our Lord, TWO BRIGHT RAYS OF LIGHT which favored the new altar of our Chapel dedicated to Our Immaculate Mother of Carmel, constructed in time for the visitation of His Excellency, the Most Reverend Gerardo Zendejas, STAYED ON CONSTANTLY IN THE SAME DIRECTION—FOR 44 MINUTES : from the first incensation of the altar UNTIL the elevation of the Sacred Wine… #ValidAndLICIT 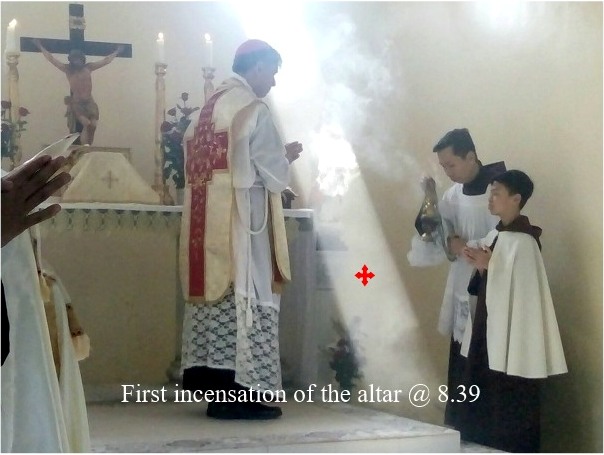 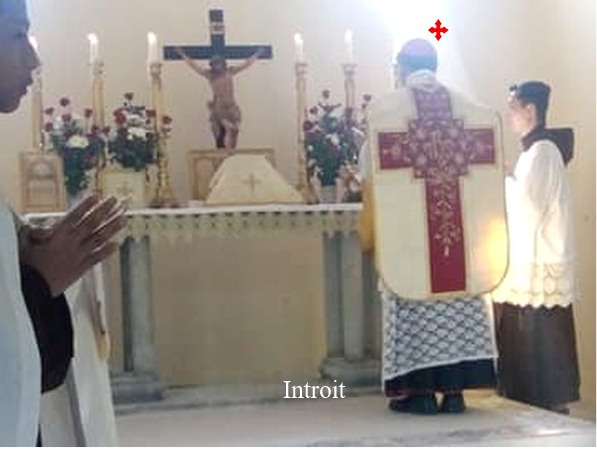 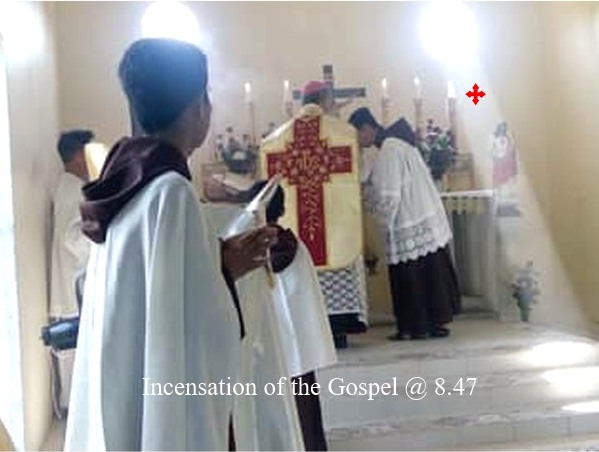 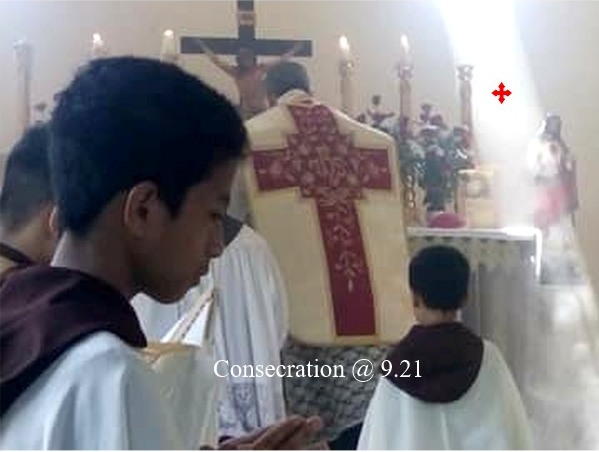 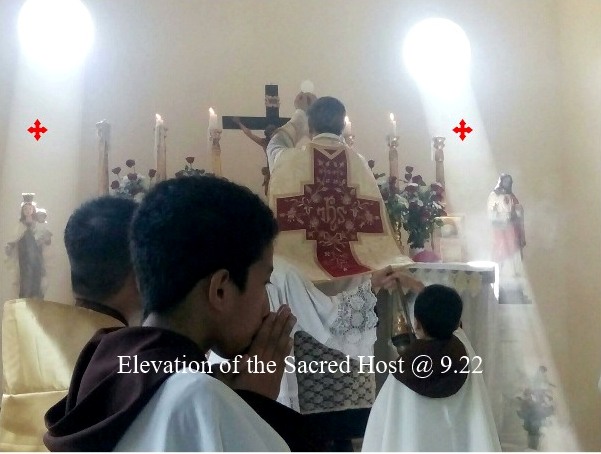 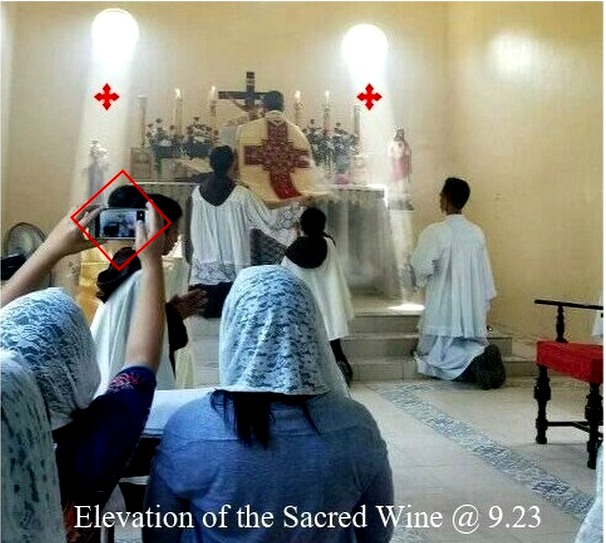 Our pre-1950 'reform' Liturgical Calendar according to the norms of the Apostolic Constitution "Divino Afflatu" of Pope St. Pius X

We worship the "Catholic God" - the Most Blessed Trinity.

VIGIL OF THE ASSUMPTION OF THE BLESSED VIRGIN MARY

ASSUMPTION OF THE BLESSED VIRGIN MARY